Gods bless ‘Merica! [both the old and the new] Muddy Monk has outdone themselves again with the ‘Merica 5 Mile Trail Race: a glorious testament to Freedom and representation with our taxation. After getting hooked on Trail Runs thanks to my friend Eric at Double Down, Muddy Monk had quite a bit to live up to after my first taste off road with them. Long story short, they delivered and proceeded to raise my expectations to even loftier heights. I met up with Eric outside of his apartment around 8:30AM and we hit the road from there. We ended up having to use my iPhone for directions a couple times, but we still got to the race site with plenty of time to take in the sights and sounds and chat with some people before the race. 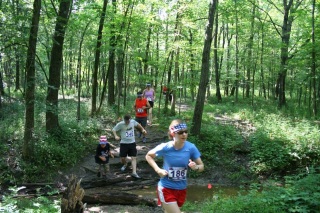 As the start of the race neared, we made our way over to the starting area where we awaited a very ‘Merican sendoff which consisted of the ritualized shot gunning of a beer by a designated party before declaring the race to be afoot. Given it was a fantastic day for a race, this event was more populated than the last Muddy Monk event that I attended (and if not, then it sure seemed like it. Perhaps because people where all hanging out together rather than huddling amongst themselves for warmth before a rainy, cold, run and stuck around afterward to celebrate!). After crossing the start, the larger crowd managed to spread themselves out to a more comfortable running distance, that is until we hit a major bottleneck before really entering the thick of the woods. We quickly came to a screeching halt as we encountered an area where only one person could pass through at a time. Soon enough we all made it through and were back on our way. This was the only time this happened during the race and it seemed to actually help spread people out along the course so that for much of the time I felt like I was running in my own private forest or in a very small group of friends!
Mile Marker number one seemed like it came much farther along the trail than I would have expected

to be only one mile. After this I started to worry when what seemed like two or three miles had passed and I still did not see a mile two marker. I don’t recall seeing any mile markers after mile one. This is not a problem, as I typically don’t keep track of miles while I run and only consult my GPS after I have finished, it only threw me to see that one mile marker and then mildly freak out that after what felt like four miles (and probably was) and I still hadn’t seen a mile two marker. Also, I heard some people along the trail commenting about the orange flags along the ground that were used to mark the trail. While they were very well placed and easy to see, one woman mentioned that during some trail runs she has done in Michigan, she has seen trees marked ribbons at closer to eye level so people can keep their heads up when they run (and so maintain better form) instead of looking down at their feet the whole time. This seems like it could be a good idea. Still I would probably be looking at my feet quite a bit anyway to see any protruding roots, plants, or streams regardless of where the markers were placed. 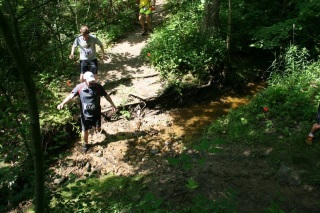 For the duration of the race, I made sure to try to keep Eric within sight range. He was quite a bit ahead of me for the first mile or so but I managed to close the distance as we approached the water station and decided to kick on the extra speed needed to catch up to him after grabbing some water. As Eric was taking it slow this race, I was able to keep up with him for the rest of the duration of the race. It was a nice change up to run a shorter race with someone at a conversational speed instead of pushing for time. While it was a shorter race for distance, it was definitely a physically tougher course. The course was a muscle workout with speed bursts placed throughout the course as a small gravel area would appear to allow the passing of people if you kicked it in gear. I took advantage of this as often as I could. Before catching up to Eric I had to climb a hill where I was very glad for the presence of toes on my Vibrams to provide a little extra grip and stability as I scaled a very steep incline filled with roots, trees, and deep trenches where the dirt had washed away, likely from rain rushing down this hill like temporary waterfall after a downpour. After getting to the top, a waterfall would have been a welcome sight as I was parched. Instead, there was another wider gravel area where I kicked on some speed in the hopes of finding a water station. I lost sight of Eric while climbing Mount MuddyMonk and figured he must have poured on the speed when greeted with the wider running surface and so I decided to push ahead to see I water could be found ahead. Sure enough, I saw the water station at the bottom of a short decent of the gravel road in front of me.
Running the rest of the way with Eric was much more refreshing than the first portion of the run. The

first bit was fun and intense and the second was a welcome exploration of the forest preserve as we wound our way through trees and across streams. After emerging from the woods for the final leg of the race the course widened again and we picked up speed for a dash to the finish! So much fun! Afterward we hung out and listened to some ‘Merican tunes while drinking fantastic beer. We even ran into fellow blogger Just_Say_Jen while she was watching the MiniMonk run for kids! Always good to meet another runner and blogger. I can’t wait for my next trail run!!

Breakdown:
Packet pickup – This one was a Universal Sole, packet pickups are always so laid back here and I always enjoy them. The packet also comes with a 20% off coupon for Universal Sole (which was handy when I picked up my IT Band roller last season, but that’s another story…) I walk in and the clerk is wearing the race shirt, comes from behind the counter when I walk into the story and inquire about packet pickup. He wanders over behind the table where all of the gear for the race is stored. When chat as he looks for my bib and race shirt and then I head out. Lovely experience as always Muddy Monk and Universal Sole! [Also, Waxman’s Candles is right next store and worth checking out if you haven’t yet and like candles. They also offer classes in candle making which I wouldn’t mind checking out sometime.] 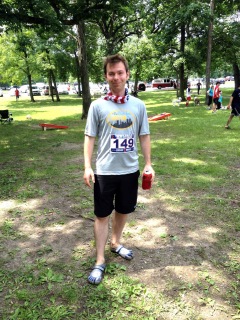 Gearcheck/Waves and Corrals. –  As always, gear check isn’t really applicable for Muddy Monk races as everyone drives there and uses their vehicles as gear check. Simple, safe, reliable. Again, since it is a small race, there really is no need for waves or corrals. We took in the very ‘Merican sights of red, white, and blue all around us before they announced that the race would be starting in five minutes and we should probably make our way over to the starting line. Once there, we awaited the ceremonial shot gunning of a ‘Merican beer by Art’s[Mr Muddy Monk] Brother-in-law, which was the countdown to releasing us to conquer nature the ‘Merican way!
Course layout – More challenging than I had anticipated and all the better for it! The last trail race I did with Muddy Monk we had the cold and rain and mud to deal with, this time the weather was beautiful and it was just good ‘ol hills and turns to navigate. In the beginning, the course was a bit tight, as in we slowed down to a stop to pass through a very tight spot one at a time before continuing on the way. This early hiccup proved to be a fantastic way to design natural spacing throughout the course so that after that initial point, there were no other jams that I encountered. This was an relaxing [intensely relaxing] run through the woods. Great course and a great park.

Finish line – The finish was a mad dash of freedom where we could let loose after going at much a much slower pace throughout the duration of the race for fear of injury or death [ok probably not death]. Eric and I kept pace with a nice burst of speed at the end and Art himself congratulated us after crossing the finish line! As far as water, food, and other refreshments, Muddy Monk took care of everything again with plenty of bottles of water and snacks (bananas, peanut butter filled pretzels, peanuts, etc.) We also got a mason jar and a beer cozy! 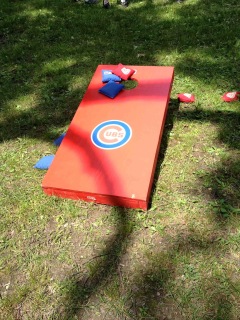 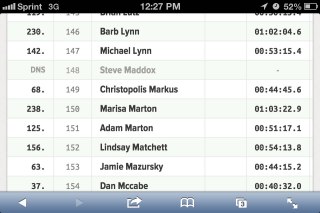