Show Me The Numbers

Numbers, Graphs, and Charts are sorely lacking in my posts. Here is a progress report for this year so far as reflected in the numbers. Get out your graphing calculators, spreadsheets, databases, and reporting software. Fire up that coffee maker and sink into that comfy imitation leather chair. This is going to be one nail biter of an intense post. Try to contain your excitement and enthusiasm for all of the potentially meaningful digits about to be pixilated and presented to your eyeballs.
Seriously though, it won’t be that bad. I don’t keep track of that much data presently.
Breakdown:
Until around April, I didn’t really keep track of when I ran, times, distances, etc. very much. Since I decided to train for the Allstate13.1 Half Marathon in June, it was in April that I decided to be more diligent in recording my progress in running. I made my best attempt to backtrack and enter data from the previous months of the year based on what I had logged through MapMyRun. Through this method of backtracking and recording new information going forward, the numbers were logged into a spreadsheet to be used as ‘the data’. These are their stories.
Year to date, 43.483333 Hours have been spent out in the world at a medium to speedy trot resulting in 302.071592 Miles run thus far. Out of 58 Days of running, 10 have been races.
Pretty Chart of those races: 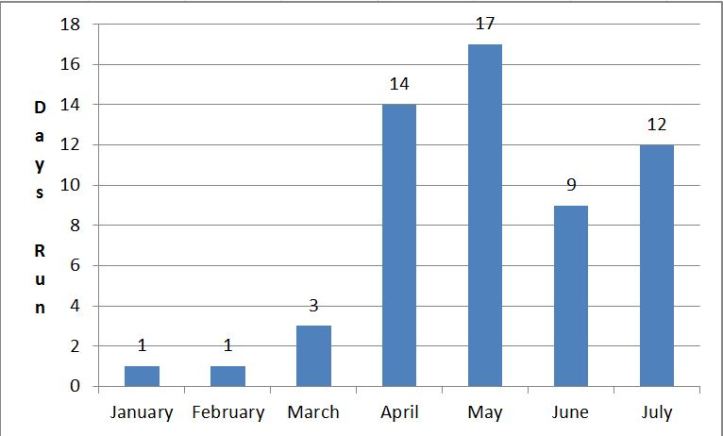 ‘Number of days run’ obviously increases as I trained for the half and drops as soon as the half was completed for my nearly one week of rest after the race. After resting I found that it took quite a bit to ease myself back into running regularly and I slowly increased my miles again through June to July.
Number of Miles Run: 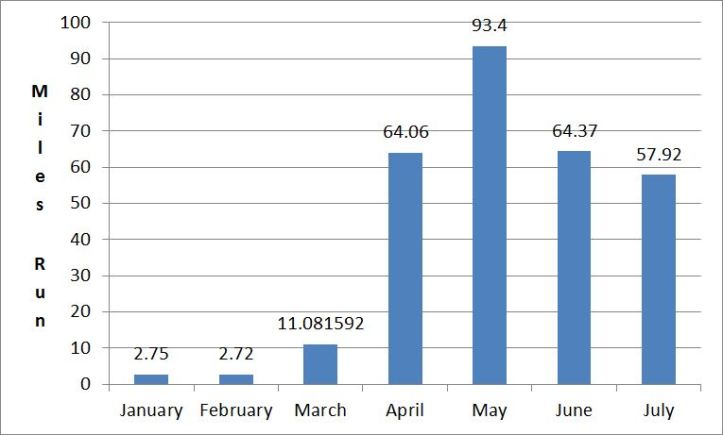 ‘Number of Miles Run’ is generally consistent with number of days run; the more days run the more miles that week/month. The only time this was not true was closer to the Allstate 13.1 Half Marathon when I ran more distance over less time and then rested afterward.

Distance of Runs:
It appears that my typical mileage is around the 5+ mile range with 3+ miles coming in a distant second and longer runs being more sporadic. I would like to get back into running longer distances more often but even then it still seems pretty logical that they would be far fewer in number than the shorter runs that I can squeeze in during the week after a long day at the office.

Summary:
It is nice to have numbers to look back on so I can analyze trends over time, habits that have formed and should be encouraged, modified, or broken, as well as just to look back over time (after I have been tracking progress for a longer duration) as to how I trained when I was one age as compared to another and whatever other factors life throws in along the way. For instance how does vacation, a new job, longer/shorter hours, living situation, relationship status, age, etc. all affect how I run? Only time will tell and the numbers can help paint a picture for someone who prefers a ‘big picture’ look at things (or for those who just can’t remember what they had for dinner yesterday and prefer to write it all down).